Richard started his career in forensic engineering and consultancy in 1997.  He investigated a wide variety of cases including product liability, mechanical/materials failures, industrial incidents, road traffic incidents, incident reconstruction and tool-mark cases.  He has received instruction across the civil... Read more 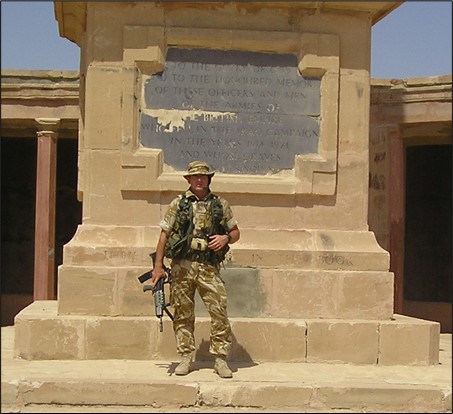 In 2004, as a fresh-faced Army Reserve subaltern, I was called up for service on Operation Telic, Iraq, more well known as the Second Gulf War. At the time it looked like it was going to be a tour filled with infrastructure building and peace support operations.  Only a few weeks in, the lid was blown right off the powder keg and it became a rather kinetic experience, personally fraught with some very close calls and life-changing experiences.  During that 6-month tour, eleven British armed forces personnel lost their lives and many more were injured.

This was not the first time that the UK armed forces had ventured into Basra in the previous century. Prior to things escalating I was able to visit the Commonwealth War Memorial located in the desert just outside Basra City.  Whilst today I remember those who fell during my time there, and the millions who gave their lives across many conflicts and wars during the last century, what struck me about the Basra Memorial, was how much we have forgotten and how often our colonial and commonwealth comrades in arms have not been remembered in the same manner as our own UK war dead. The Basra Memorial commemorates the little-known Mesopotamian Campaign (1914-1918) but also those killed during the extension of that into the Iraq campaign that ended in 1921.  During that period, it is recorded[1] that of those 40,640 killed 33,256 were Indian, 7,371 were from the UK, 11 were Australian, 1 was Canadian and 1 was from New Zealand.  All, but the Indians are named on the memorial.

The poignancy of this is not lost on me and neither should it be to anyone else.  Our local cenotaphs and memorials are adorned with the names of those who never marched home from fighting for Britain.  At a time where public commemorative events are restricted and Remembrance Events cancelled, it is easy for us to look inwards at life’s current inconveniences and how our daily business is somewhat stalled.  I would ask that we all honour the 2 minutes silence and take that small time to think hard about those who made that ultimate sacrifice for us and future generations.  Those known and unknown, British or foreign, colonial and commonwealth servicemen and women; all of whom stood up and fought for us when all other options had gone.  In particular, we should acknowledge the years of hardship, terror, pain, separation from family and the anguish people went through that have allowed us to live our lives largely free of them today.  I think taking just those 2 minutes to offer our thoughts and our thanks to every single one of those people, all of whom sacrificed their own lives, dreams, families and aspirations, should be something we as individuals and as a nation should be collectively proud of.

We should also remember the sacrifices made by all of those that supported the servicemen and women both on and off the battlefields.  Those who made and supplied the vital manufacturing, food, munitions, medical aid, mail and so much more that kept those at the front supplied and alive (physically and spiritually). Many of those were at equal and in some cases greater risk, and without them the size of any army, navy or air force, is immaterial.  Too often also forgotten is the sacrifice made by and the effects on the families and the civilian populations at home – ‘They also serve who stand and wait’.

As a proud Squadron Commander, I am sad that COVID will not allow me to lead my soldiers thorough the streets of Wallsend this year to the Cenotaph, but we will all be performing our own individual commemorations and saluting the last post.  I hope you will join us.

A Remembrance Day piece by Major Richard Hoyle RE VR